We recently worked with a client who asked us to create a freestyle web canvas, for adding various types of ‘Card’. We love a challenge so got to work on the requirements:

This was a complex epic, and there was definitely some head scratching. However we finished it on time and the end result is beautiful, responsive and fully covered by end to end tests. We used DndKit for dragging and dropping, D3 Zoom for panning and zooming and Cypress for the tests, which were all a pleasure to work with, and we would do so again.

A very stripped down version of the Canvas component is shown below, with the code required to hook up to D3 Zoom, and to apply the tranform.

The transform is applied to the canvas element, and the browser will automatically apply the transform to anything under it in the DOM tree, so nothing on the canvas needs to do anything.

In order to create insightful visual arrangements, users wanted to be able to see all of their cards in a tray, and to drag them from there on to the canvas. None of the DndKit examples were that close to what we wanted, so we had to strike out on our own (although the documentation is excellent, which made things easier.) 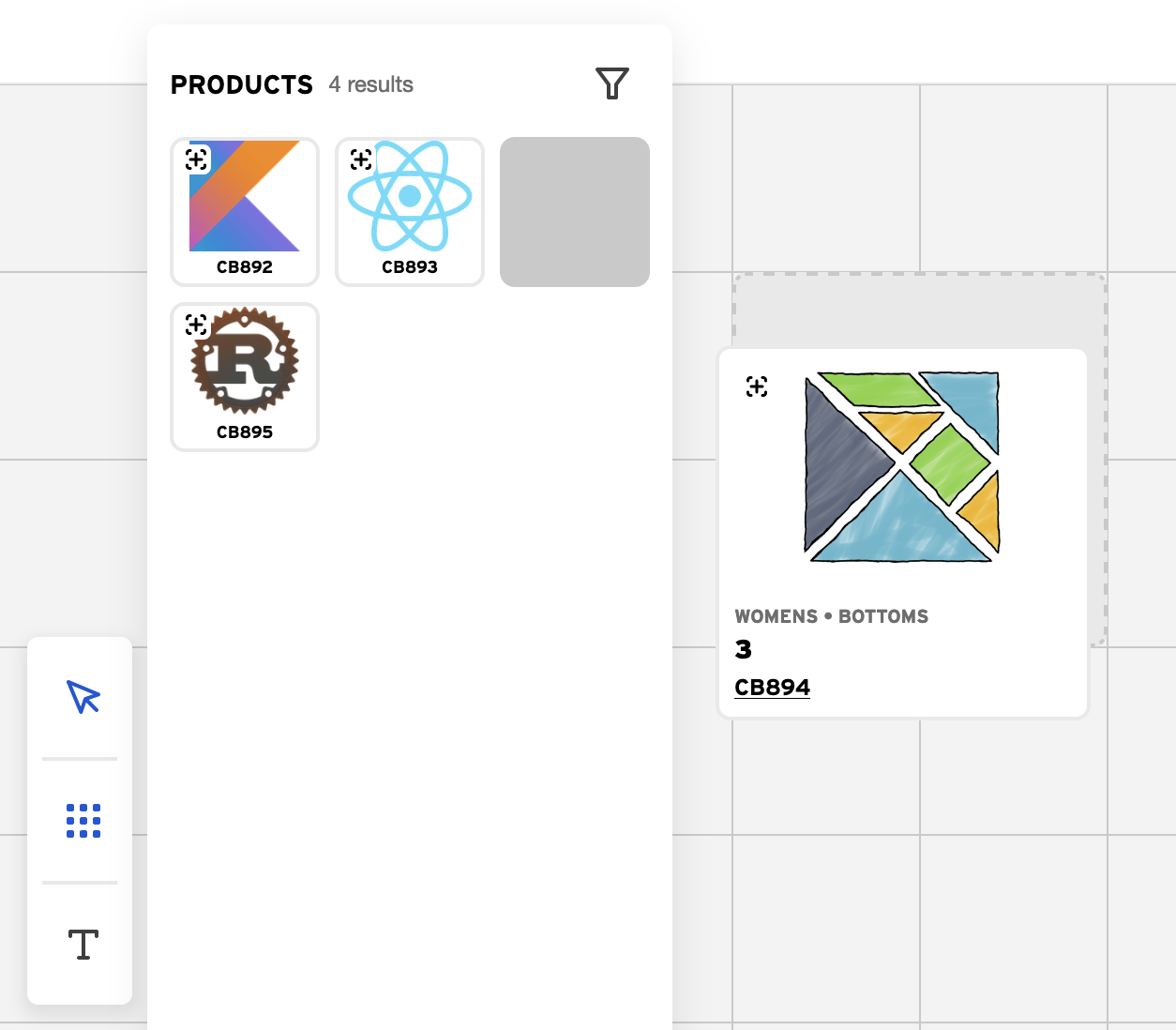 Display cards on the canvas

When an item is drag / dropped from the tray it needs to appear on the canvas, so firstly we simply hard coded a list of cards to display. These had an x, y position on the canvas, and all the information they needed to render. We sized the cards to match the grid size, and used the code below to position the cards on the canvas.

Allow dropping when dragged over the canvas

In our UI, the tray popped up over the canvas, and being as the canvas was a drop target, it was initially possible to drop a card on to the canvas without having first dragged it off the tray.

To fix this we created a custom strategy to work out the drop target by composing existing DndKit strategies (as recommended by the documentation).

We first check to see if the current drag position is intersecting with the tray, and if so we return that. If not we fallback to the standard DndKit behaviour. This requires us to set up the tray as a drop target, and for the drop event to check what drop target was found (and to ignore the tray if this is the target).

The code for the custom strategy is like this

We already had canvas card components from earlier, but the zoom transform was being applied to the parent canvas component, so we still needed to size the drag overlay correctly.

This was achieved using the same scale transform that was applied to the canvas:

To work out the position on the canvas, we need to know a few things:

The canvas position is then (panning position - drop position) / zoom

We already store and have access to the zoom level and the panning position of the canvas, but the drop position is a bit trickier.

The DndKit drop event gives us the delta of the drag operation, but sadly doesn’t give us the initial position of the drag. It does however allow us to attach some custom data via a ref in useDraggable, so we store getBoundingClientRect() as initialRect, and can access it in the drop event with active.data.current.initialRect. This allows us to calculate the window / viewport drop position, which then allows us to calculate the drop position on the canvas.

The full code looks like this. transform controls the pan (x, y) and zoom (k) of the canvas.

Once we have worked out a position on the grid, snapping to a grid is trivial! We just need to decide on the grid size, and then round the coordinates to it. There is even a nice example in the DnDKit docs.

Once we have all these items in place, we can integrate with DndKit.

There is a DndContext, that DndKit uses to store all the state:

Then each component on the tray can useDraggable to enable drag and drop.

Drag Cards on the canvas

Once the cards are on the canvas, we can use DndKit again to make them draggable. This is a bit different to dragging / dropping from the tray, as nothing new gets added to the canvas, and instead an existing item changes position.

The DndContext is much the same as before

The cards on the canvas are slightly more complex, as they have to position themselves on the canvas, and update their position temporarily while they are being dragged.

Cards should not overlap

One of the requirements was that cards should not overlap on the canvas, so we needed to detect when collissions would occur and prevent them.

The cards themselves are square, so the code to detect whether two cards collide is trivial. The one minor complication is that the collission detection has to take place after the coordinates are snapped to the grid.

When dragging, if a card on the canvas would collide, we add a red overlay to it. When dragging around the canvas, we show the last known good position of a card with a dashed outline, which is where the card will go if it is dropped. This updates as a card is dragged, and snaps to the grid. Where a card on the canvas would cause a collission, the last known position simply stays where it is, until the dragged card is moved in to a collission free space. 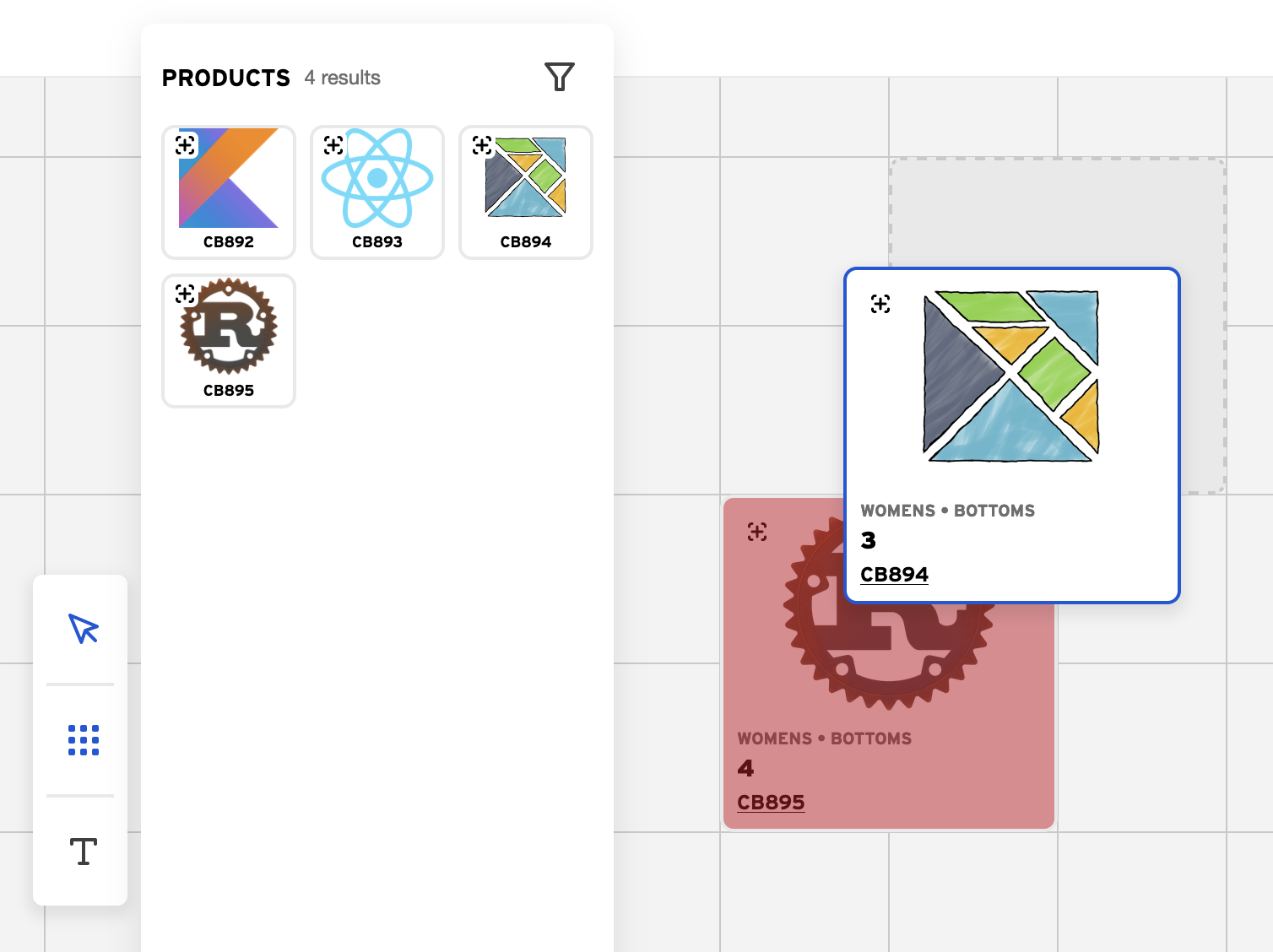 We added Cypress Custom Commands, like the one below to make it easy to write end to end tests.

The wrap command turns a jquery object in to a cypress object (that you can then chain other cypress comannds off), and the trigger command creates simulated events. There is a slight annoyance in that there are quite a few events triggered in response to various mouse operations, but it is all encapsulated in the custom command so writing the tests is still easy. { prevSubject: 'element' } specifies that the dragOntoCanvas command can only be chained off cypress commands that yield element’s.

We can then use the custom command in tests like this.

So there with have it! A fully tested custom web canvas that you can drag cards to, and then rearrange.

It took around one sprint to spike, and then another to get to v1, and there have been subsequent iterations to add features and improve performance, which may become topics for future posts!

If this sounds like the sort of work you would like to do then come join us, or if you are tackling a similar problem at your company please get in touch.