For a while I’ve been wondering how practical it is to use Rust both for web applications (and services) on the server and for web UI in the browser. So I’ve been spending quite a lot of time exploring the developer experience, whilst trying to understand whether Rust in the browser is actually a good idea! TLDR; it just works and it’s a wonderful experience!

Viktor Chaypar and I have been working on an open source feature targeting project, which currently consists of a Web Assembly (WASM) filter for Envoy sidecars in Istio, which we’ve written entirely in Rust. In this spirit, I thought it would be nice to write a demo application (also entirely in Rust) that we could use to demonstrate the feature-targeting filter in action. I make no excuses for this rather self-indulgent experiment!

The demo application expands on the ubiquitous TODO MVC application, by adding a database and user authentication. It seemed like a good idea because I wouldn’t have to write much CSS, and it’s simple enough not to get in the way of what I was really trying to prove – that Rust is amazing, wherever you choose to use it. 😍

This is a rough diagram of the setup (drawn in the excellent excalidraw), where all the orange boxes are either fully, or partially (in the case of the gateway), written in Rust:

The browser runs the TODO client, which is compiled to WASM. The Envoy filter is also compiled to wasm and injected (by Istio) into either the ingress gateway or the relevant sidecar (either approach is sound). The GraphQL API and the Web server are lightweight and fast. On my laptop, round trips through a release build of the API and a PostgreSQL database, take roughly a millisecond!

These are some of the crates we used in each component:

You can read all about the Envoy proxy filter in our feature-targeting repo, so I won’t repeat that here. Have a read though, because it’s super interesting that we can now extend the Istio data plane with Rust and WebAssembly.

I’ve written many APIs in my time, and I can honestly say that this (as simple as it is) has been the most enjoyable experience.

For example, the data layer is super thin when using sqlx. This is db.rs:

The sqlx::query_file_as!() macro ensures that the SQL in the specified file is correct against the schema at compile time, that the parameters are of the right types, and that the response is deserialized into the specified type.

The only downside is that you have to have a (probably local) instance of, for example, PostgreSQL running with a database and relevant tables created from the specified schema.

Our SQL queries return the modified record (which is nice for GraphQL mutations). This is sql/update.sql:

Nothing stands still in the Rust ecosystem. Not long ago, juniper was the go to choice for a GraphQL server. But I had to specify the github repo in my Cargo.toml to get async support, and it all feels a bit messy now. I was happy to find async-graphql, which is similar and more modern, easy to switch to, and has a nicer and simpler API.

The introduction of SimpleObject for objects whose fields don’t, themselves, have resolvers is a nice touch. The new GraphQL Playground, which is the default, is a much improved experience (when compared to the older GraphiQL UI), and makes working with the API a dream.

When we need to handle an incoming GraphQL query, we simply increment the reference count on the schema (which is in the request’s state) and pass it into the executor. Extracts from graphql.rs:

The model is simple:

If you ignore the lifetime type parameter on Context, I think you could probably say that this is simpler than the JavaScript equivalent! And this code generates the schema, and includes full error handling (it’s easy to miss the ? operator).

Mutations follow the same pattern and are just as simple.

So to tie it all up, we just need to create a tide app, passing in a pool of database connections as state. Notice how the concept of middleware in tide is almost identical to that of express-js. This is lib.rs:

And then all that’s left to do is instantiate the web server (this is main.js):

That’s actually it! There is literally nothing more to it.

A GraphQL API with queries and mutations (not shown here, but just as easy), backed onto a SQL database, that can turn around queries in a millisecond…

… and it comes in at under 200 lines of Rust. Check out the full source code at https://github.com/redbadger/feature-targeting/tree/master/examples/todomvc.

This is the fun bit!

All modern web browsers support WebAssembly, and Firefox has supported it since March 2017. Currently 91.39% of requests made globally are from browsers that support WASM. This might not be enough for every use-case, especially internal apps at Microsoft shops (IE 11 is, as always, the main offender here), but it does feel to me that the time has come for us to be able to have WASM web apps, and I would flippantly suggest that those using IE11 should use something else instead!

Additionally, there is currently a beautiful love affair ❤️ going on between Rust and WASM. The toolchain is superb, with wasm-* targets fully supported. And as with all things Rust, there is a book about it.

When I was adding auth support to the Todo MVC app, I figured it’d be nice to do OAuth2 implicit flow. I wanted to generate a real JWT token, so that we can use the claims inside it (e.g. email) to control both client-side and server-side features. Strictly speaking, these days, we should, instead, use the OAuth2 authorization code flow with the PKCE (pronounced like the word “pixie”) extension. As with the implicit flow, we don’t need to give the client secret to the browser. But because this is only a demo I decided to not worry too much (I don’t even validate or renew expired tokens, but you definitely should in a real app).

OK let’s get on with it.

I guess the place to start is with the Cargo.toml which needs to specify that our library will use C-like FFI, and that we want wasm-bindgen to generate the interface for the WASM runtime. Here are the relevant bits:

Then we just need to annotate a function as our entry point. This is where we create the seed app:

We also need to load the binary in the web page and mount our app on a DOM node (the default id for the mount-point is app). These are the relevant parts of index.html:

We can easily build the WASM module using wasm-pack (by default into a file named after the crate, and in a directory named pkg):

and host it using a simple static webserver (for now):

It’s good that there are a few choices of web frameworks in the Rust ecosystem. We mentioned yew, which is probably the most popular. We’re using seed here because I don’t feel the need for jsx syntax. IMO it complicates the boundaries between the declarative and imperative parts of the view. It seems clearer just to stay in pure Rust syntax as much as possible. Rust has a very powerful macro subsystem, and I think seed makes good use of its macros.

For example, in the screenshot, look at the “All”, “Active” and “Completed” filter buttons, and at how they are implemented in the code-box below: 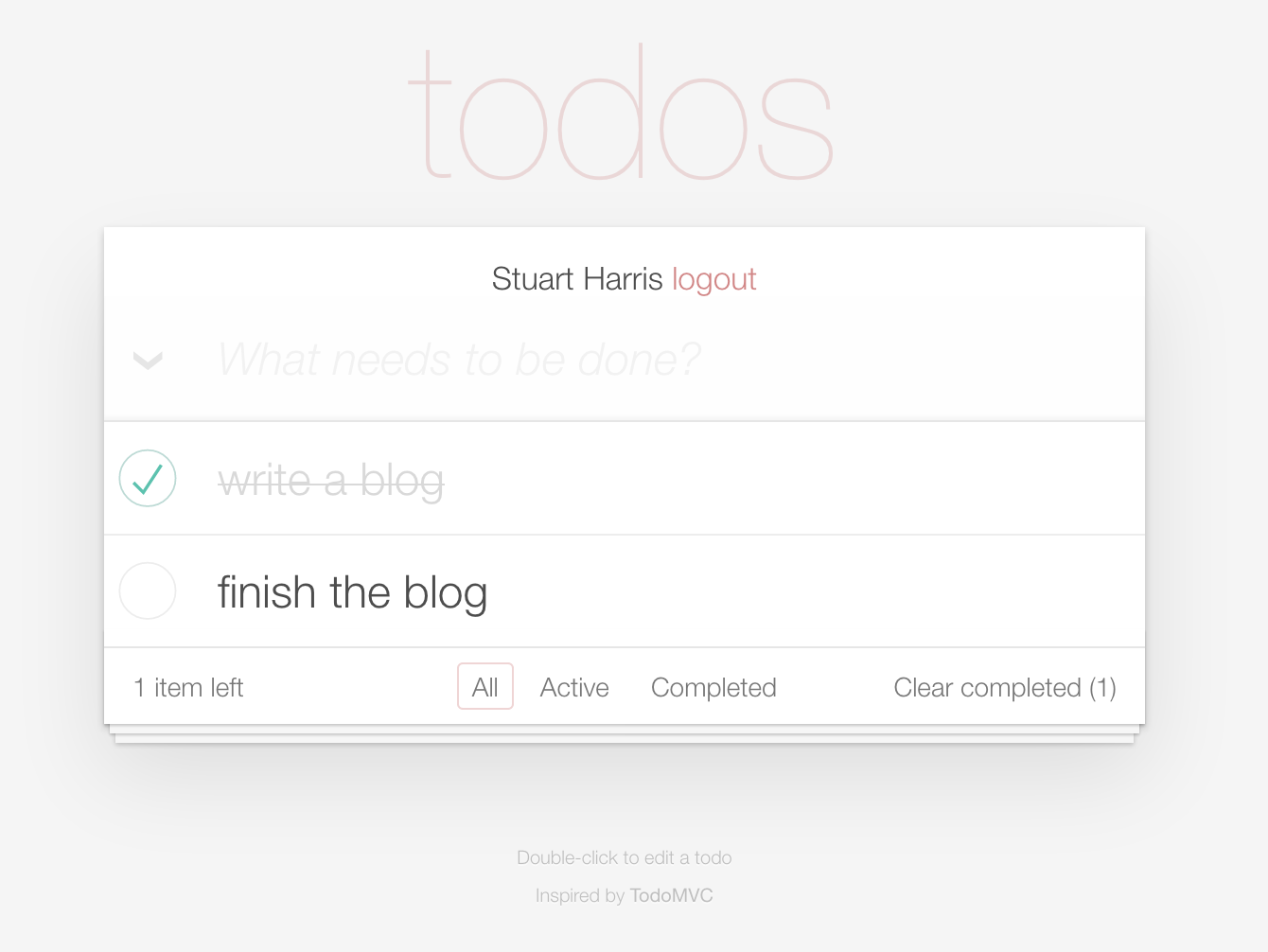 Notice how the filter-button component, view_filter, is literally just a function. The macros take any number, of any type of arguments, in any order. There’s a macro for each HTML element and you can have svg!, md! and custom! elements, amongst others, for SVG, Markdown and custom elements respectively. The C! macro is used to specify the CSS class name, and the special IF! macro is just a short-cut that returns an Option of the expression value if the predicate is true. There are enums for attributes, styles, events etc.

The view_clear_completed component, below, counts the completed todos and renders a button that will emit the ClearCompletedTodos message when clicked.

You can see, with the ev() function call and the call to format!, how easy it is to mix in vanilla Rust syntax , and, since everything in Rust is an expression anyway, views become really easy to assemble.

So, for example, instead of using the IF! macro in the view_filter component above, we could have written:

The click event handler for the view_clear_completed component simply emitted an enum variant as a message. These are declared just like ordinary enums. These are ours:

You can see some of these are in pairs (one to initiate a call to the API and one to process the response). They’re handled in a single match in the update function. This is just like the Elm architecture and, I guess, similar to Redux in the React world.

The match in the update function, below, is not exhaustive so it won’t compile against the above enum, but for illustrative purposes, you can see how we asynchronously call the GraphQL API and then emit (return) another message when it’s done, in order to process the response (in the second match arm). Incidentally, the .skip() allows us to prevent the next render because nothing changed. A third match arm logs errors (and, indeed, malformed responses) to the developer console.

OK that’s probably enough already! I hope you are getting the feeling that writing a web front-end in Rust is pretty straightforward. I, personally, think it’s a pleasant experience. Obviously it’s a fairly new (and frequently changing) ecosystem, but I like the way it’s going, and it’s incredible how fast it’s maturing.

Rust is proving itself as an extremely competent contender for Web UI and services, as it is doing in many other spaces – it’s not just a systems programming language.

You can check out all the source code in the examples directory of our feature-targeting project. Feel free to raise issues if you have questions (or raise a PR if you’re up for it) ❤️